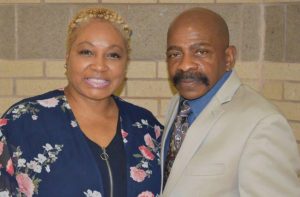 Charles Tucker’s Bio:
My name is Charles Tucker, I’m a US Army Veteran having served a Tour of Duty in South Korea as a Radio Repairman, retired from Norfolk Southern Railroad as a Freight Conductor after a 24 year career. I worked at the Georgia Dome for 24 years as a Club Level Seating Host, and now I work at the Mercedes Benz Stadium as a Premium Seating Host. I have been a member of Living Word Church Ministries for eight years serving as an Usher. I’ve been happily married to my beautiful wife Angela for eight and a half years.

My favorite Bible verse is the 23rd Psalm.

My name is Angela Tucker. I am native of Atlanta , Georgia . I have been married for 8 years and counting to my wonderful husband Charles. I have three daughters and five grandchildren , together my husband and I have six children and fourteen grandchildren. I have worked as a Retail Manager for fifteen years at Justice , and New York and Company.  I love fashion and styling God’s people. My favorite Scripture is Psalm 91.